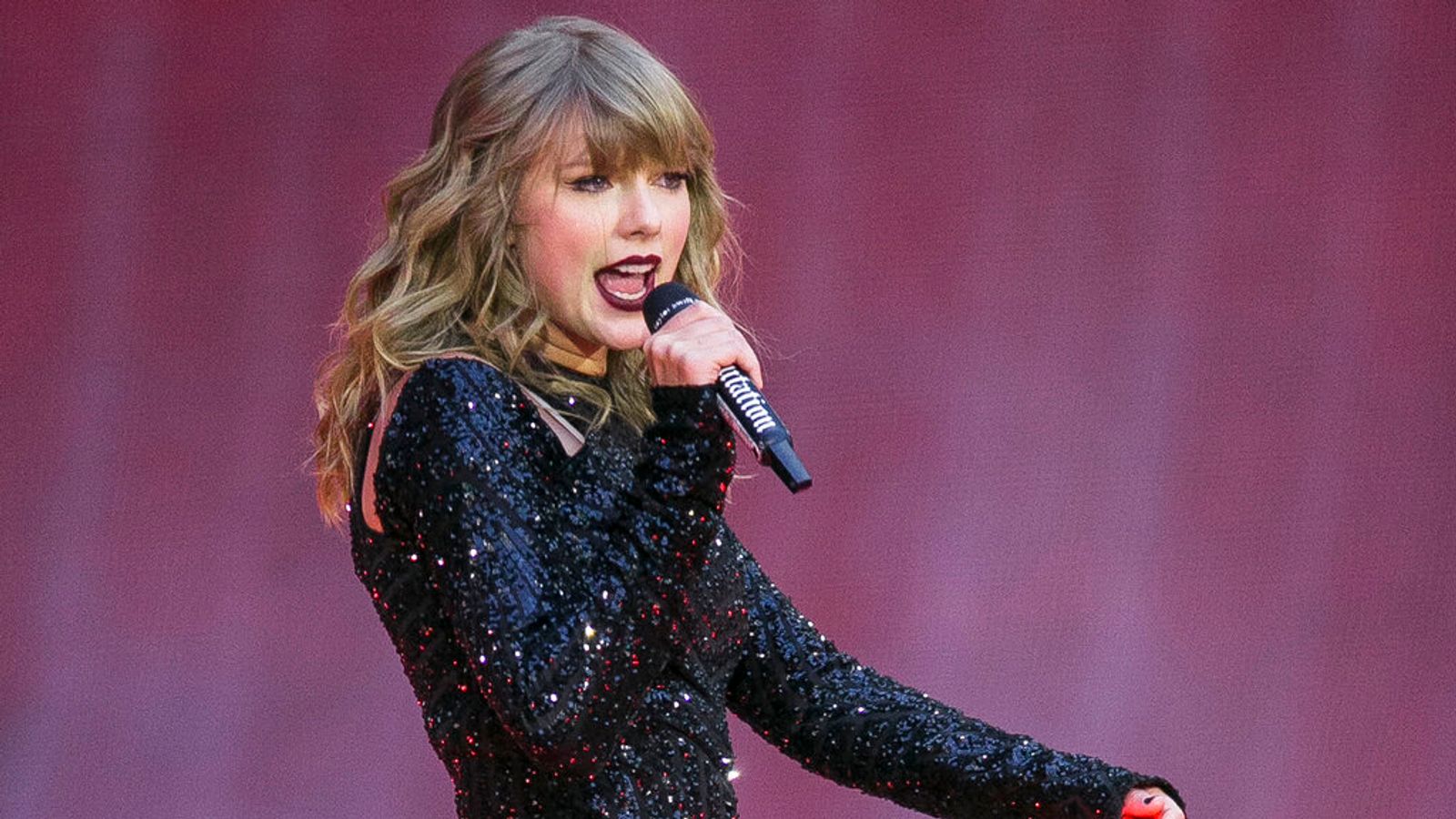 When Taylor Swift announced what will be her first tour in five years, demand for tickets was always going to be high.

But following reports of service failures and delays on the Ticketmaster website, the general sale was called off.

Ticketmaster handled ticket sales for most of the shows on Swift‘s 20-city, 52-date US leg of the tour, although SeatGeek sold tickets for a few performances in Texas and Arizona.

Many fans have been left disappointed. But this is more than just a tale of frustrated Swifties – now the US Senate is involved.

Here’s a look at what happened.

The release of Midnights

Back in August, Swift revealed details of a new album, titled Midnights, telling the stories of “13 sleepless nights” from throughout her life.

The album, her tenth, was released on 21 October and immediately broke streaming records, with Spotify announcing it had become the most-streamed album in a single day – after users reported a huge spike in outages apparently caused by the surge in demand.

Following its release, Swift, 32, became the first artist to claim all top 10 slots in the US Billboard Hot 100 chart, and the album and its lead single Anti-Hero also charted at number one in the UK.

Midnights followed Folklore and Evermore, Swift’s forays into indie and folk which came out just five months apart in 2020 as the world was in various states of lockdown during the pandemic.

Having not toured since 2018, it seemed inevitable an announcement was coming…

Swift announced The Eras Tour on 1 November, telling fans it would be “a journey through the musical eras of my career (past & present!)”.

Dates for the US leg of the tour were announced, kicking off on 18 March 2023 in Glendale, Arizona, with international shows set to follow, the star said.

Swift also confirmed she will be joined by a number of artists during the tour, including bands Paramore and Haim, and solo artists Phoebe Bridgers and Gracie Abrams.

She also shared a verification link for a presale, which meant fans had to register first to be able to buy tickets.

On Thursday 17 November, the day before general tickets were due to be made available, Ticketmaster cancelled the sale – citing “insufficient ticket inventory” to meet “extraordinarily high demands”.

It came after the presale two days earlier caused the site to crash, leaving many fans frustrated and unable to get tickets.

The ticket company had previously asked fans on Twitter to be patient as “millions” tried to buy tickets in the presale, causing “historically unprecedented demand”.

Swift’s fans, known as Swifties, criticised the firm on social media after encountering long wait times and site outages during the presales. Some reported waiting in online queues for up to eight hours, with many finding they were too late to purchase tickets, which cost between $49 (£41) and $449 (£377) each.

In a statement, Ticketmaster said it had anticipated heavy demand for tickets, but it was clearly even greater than they had predicted.

The plan was to invite 1.5 million of those to participate in the sale for all 52 show dates, including the 47 sold by Ticketmaster, with the other 2 million placed on a waiting list.

But this plan, Ticketmaster said, was undermined by attacks by “bots” – automated software requests – as well as demand from those who had not registered beforehand.

“The staggering number of bot attacks as well as fans who didn’t have invite codes drove unprecedented traffic on our site, resulting in 3.5 billion total system requests – 4x our previous peak,” Ticketmaster said.

“Never before has a Verified Fan on sale sparked so much attention – or uninvited volume.”

What did Swift say?

Following the debacle, Swift criticised Ticketmaster, saying she and her team had been assured they could handle the expected surge in demand.

“It’s really difficult for me to trust an outside entity with these relationships and loyalties, and excruciating for me to just watch mistakes happen with no recourse,” she wrote in a statement on Instagram.

“There are a multitude of reasons why people had such a hard time trying to get tickets and I’m trying to figure out how this situation can be improved moving forward.

“I’m not going to make excuses for anyone because we asked them, multiple times, if they could handle this kind of demand and we were assured they could.”

The star said that 2.4 million fans had been able to purchase tickets, which was “truly amazing… but it really p***** me off that a lot of them feel like they went through several bear attacks to get them”.

To those who missed out, she said she hoped to put on more shows.

Why is the US Senate involved?

Ticketmaster, which overwhelmingly dominates the ticketing industry, has for years left fans and artists frustrated by hidden fees, rising costs, and limited tickets availability due to presales.

And when these sorts of problems affect Swift, arguably the biggest pop star in the world, it attracts global attention. Which means US politicians are now looking into Ticketmaster’s dominance in the industry.

Senators Amy Klobuchar and Mike Lee – chairwoman and ranking member of the Senate Judiciary Subcommittee on competition policy, antitrust, and consumer rights, respectively – have announced plans for a hearing.

“The high fees, site disruptions and cancellations that customers experienced shows how Ticketmaster’s dominant market position means the company does not face any pressure to continually innovate and improve…

“When there is no competition to incentivise better services and fair prices, we all suffer the consequences.”

The issue goes “way beyond Taylor Swift”, she later added on Twitter.

The hearing date and witnesses will be announced at a later date.

What does Ticketmaster say?

The company has posted a lengthy explainer on its Ticketmaster Business website, saying it was aware that a record number of fans would want to buy tickets for Swift’s shows.

“First, we want to apologise to Taylor and all of her fans – especially those who had a terrible experience trying to purchase tickets,” it said. “Next, we feel we owe it to everyone to share some information to help explain what happened.”

The company went on to say the verified fan registration was designed to help manage high demand – “identifying real humans and weeding out bots”.

However, the demand broke records, with 3.5 million system requests, it said – four times its previous peak. This unprecedented traffic “disrupted the predictability and reliability” of the verified fan registration.

‘Swift would need to perform a stadium show every night for 2.5 years to meet demand’

Ticketmaster said that despite the problems, some 2.4 million tickets have been sold – with two million on Ticketmaster making it the most tickets ever sold for an artist in a single day.

It also said that less than 5% of the tickets for the tour “have been sold or posted for resale on the secondary market”, while sales without the verification process “typically see 20-30% of inventory end up on secondary markets”.

The company is now working “to shore up our tech for the new bar that has been set by demand” for Swift’s tour.

It also said that even when online sales go “flawlessly from a tech perspective”, there are often fans who are left disappointed when they miss out.

“For example: based on the volume of traffic to our site, Taylor would need to perform over 900 stadium shows (almost 20x the number of shows she is doing)… that’s a stadium show every single night for the next 2.5 years.

“While it’s impossible for everyone to get tickets to these shows, we know we can do more to improve the experience and that’s what we’re focused on.”

Swifties in the UK and other countries outside the US are still waiting for details of international dates – and hoping their ticket-buying process will be a little smoother.

Number of landlords selling up rises by nearly 13% in four months
Man arrested over fatal shooting of Migos rapper Takeoff
Sam Bankman-Fried could face years in prison over FTX’s $32 billion meltdown — if the U.S. ever gets around to arresting him
Morrisons owner paves way for departure of veteran CEO Potts
HSBC head dismisses idea China is trying to get hold of the bank’s Asian operations