The intense discussion over Scotland’s future is reaching another, major milestone.

Politicians on both sides of Scotland’s independence debate are waiting with bated breath for the judgment from the Supreme Court on whether the Scottish parliament has the power to legislate for a second referendum without the approval of Westminster.

Five judges – who have spent the last month examining 8,000 pages of legal arguments – are set to deliver their determination at 9.45am today.

There are four possible outcomes.

If the Scottish government wins, activists say it would essentially trigger the beginning of a referendum campaign.

It would allow Nicola Sturgeon to table the draft referendum bill at the Scottish parliament, where it would pass because the majority of MSPs are independence supporters.

It is likely these talks would be fraught.

The second scenario is the court sides with the UK government and rules consent is needed from Westminster to re-run a referendum.

Downing Street would feel its position has been vindicated, but Ms Sturgeon is likely to argue it is an attack on democracy and “proves” Scotland is “trapped in an unequal union”.

The first minister has been clear that she will use the next general election on the single issue of whether Scotland should become independent.

Her ministers say it would be a “de-facto” referendum; their opponents say they will boycott any such scenario.

Another possible outcome is the court decides it is unable to rule on a Holyrood-created referendum because the planned legislation is still in draft form.

Court gives a view – even if premature

And even though UK government lawyers urged the judges to hold back on ruling on hypothetical scenarios, they might decide to offer a view to clear things up once and for all. 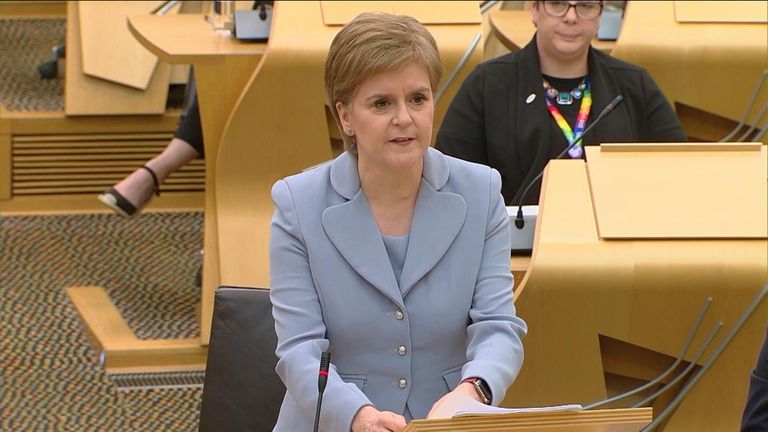 ‘Fiction’ of union if referendum blocked

How did we get here?

In the run-up to the 2014 Scottish referendum, the former first minister Alex Salmond and then prime minister David Cameron signed an official agreement to allow the vote to take place.

The eventual outcome was Scotland voting to stay in the United Kingdom.

Since then, Ms Sturgeon’s SNP government has won every Scottish election and put a referendum commitment in each manifesto.

Ms Sturgeon argued, among other issues, that Scotland was “dragged” out of the EU despite voting to remain.

She insists her party has a mandate to test the electorate on the question of independence on 19 October 2023.

However, this time the Conservative government at Westminster is not agreeing to a second vote.

Successive prime ministers have said the 2014 vote was decisive, and the SNP should instead focus on improving domestic challenges in education and the health service.

Why this ruling matters

There has been a deadlock between Holyrood and London for years.

The political stand-off landed in the Supreme Court in October, where the Scottish government sought clarity on Edinburgh holding a vote without the consent of London.

It argued any referendum would be “entirely advisory” with “no legal consequences”.

UK government lawyers insisted it was crystal clear Holyrood does not hold the power for a second vote, and urged judges to throw out the case.

They argued it would be “premature” to rule on something which is only a proposed bill at this stage.

The Supreme Court’s role is to look at the matter only from a legal perspective.

It cannot be underestimated how important this ruling is because nearly every day-to-day issue in Scotland is seen through the prism of the constitution.

It is arguably the biggest political elephant in the room, lingering over domestic debate.

Almost every poll suggests Scots are split down the middle on the future of the country, and it’s unclear whether this judgment will help settle the matter.