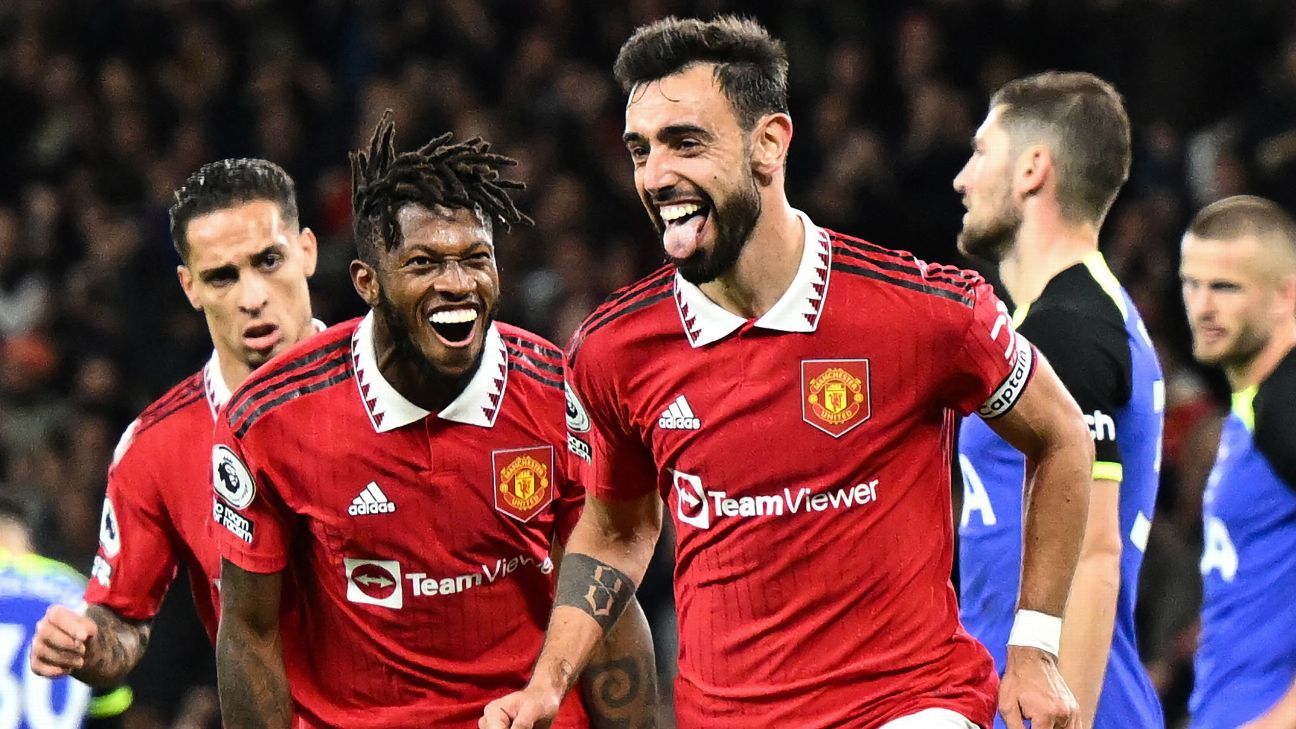 MANCHESTER, England — Manchester United climbed to within a point of the Premier League‘s top four with a comfortable 2-0 win over Tottenham Hotspur at Old Trafford on Wednesday. Midfielders Fred and Bruno Fernandes supplied the goals, with Spurs No. 1 Hugo Lloris keeping the Londoners within touching distance.

The Red Devils now lie fifth in the table, a single point behind Chelsea, and four behind third-placed Spurs with a game in hand.

Manchester United sealed a hat trick of Old Trafford wins against Big Six rivals with their win over Tottenham on Wednesday. Erik ten Hag’s team, who have already beaten Liverpool and league leaders Arsenal at home this season, added Spurs to their list ahead of Saturday’s trip to Stamford Bridge to face fourth-placed Chelsea.

Spurs arrived at Old Trafford having lost just once in the league this season, and a win would have taken Antonio Conte’s team into second place, just a point behind the Gunners.

United dominated throughout, though, registering 28 shots on target against Tottenham’s eight, and they were always in control after Fred’s 47th-minute strike, deflected off Spurs full-back Ben Davies, opened the scoring. Fernandes made it 2-0 on 68 minutes with a curling effort from the edge of the penalty area before the Portugal midfielder was a denied a third later in the game due to being offside.

But having played out a dull 0-0 draw against Newcastle United on Sunday, United returned to winning ways, despite their forwards failing to score again. No United striker has scored at Old Trafford since Marcus Rashford hit two against Arsenal on Sept. 4, but the midfield stepped up on this occasion to leave United with the chance of climbing into the top four with a win at Chelsea this weekend.

2. United’s progress will stall without a striker

Man United are improving under Ten Hag, but their progress risks stalling unless the club can find a proven goal scorer in the next two transfers windows. Although United desperately need a centre-forward at the peak of his powers in January, the £220 million summer spending spree means that a big signing is highly unlikely in the winter window, but they simply cannot start next season without addressing the long-standing issue of a lack of a world-class goal scorer.

For the fourth successive home game, United dominated in terms of chances created, but the goals didn’t go in until Fred’s long-range shot deflected off Davies and into the Spurs net in the second half. The main culprit against Spurs, and during Sunday’s 0-0 draw against Newcastle, was Rashford.

He doesn’t enjoy playing through the middle and it shows. He lacks the strength to hold off defenders like Tottenham’s Eric Dier and his finishing is too often wayward and lacking conviction.

Cristiano Ronaldo, 38 in February, clearly isn’t the solution, and he started this game on the bench again. Anthony Martial cannot be relied upon to be fit or in form, but that has been the case since he arrived in 2015.

Rashford and Martial have had six and seven years, respectively, in the United team and neither are good enough to play the centre-forward role, while Romelu Lukaku, Zlatan Ibrahimovic, Alexis Sanchez and Edinson Cavani have all come and gone during the same period. Ten Hag has made United better defensively and the midfield is showing signs of being a cohesive unit, but without a reliable goal scorer, the team will only go so far.

Just when you think Tottenham might buck the trend and mount a sustained title challenge, they do what they always do and lose a big game.

Antonio Conte’s team arrived at Old Trafford knowing that a win would rubber-stamp their place in the title race alongside Arsenal and Manchester City. They had lost just once all season, at Arsenal, and a win would have moved them 10 points clear of United.

But having lost their first big test of the season at Arsenal, Spurs lost again at Old Trafford. So despite having made their best-ever start to a Premier League season, Spurs have still failed to beat any of their so-called Big Six rivals, having drawn 2-2 at Chelsea in August.

Spurs were disappointing at Old Trafford. Harry Kane and Son Heung-Min barely saw the ball, their midfield was overrun by United’s and there was a lack of edge throughout Conte’s team.

With Kane and Son in the team, Spurs will always compete for the top four, but they don’t have enough elsewhere to worry the best sides. And with games against Liverpool and Man City still to come, Tottenham’s dismal form against the top clubs is unlikely to end soon.

BEST: Fred, Manchester United. The Brazil midfielder is flourishing at Old Trafford this season, and the signing of international teammate Casemiro has clearly helped him find his form. With Casemiro anchoring the midfield, Fred is now able to push forward and his goal at the start of the second half was a reward for his performance.

WORST: Rodrigo Bentancur, Tottenham. The Spurs midfielder failed to win the battle in the centre of the pitch and his inability to close down Fred or Casemiro led to a blazing row between him and Conte in the first half. Bentancur was so vocal towards his manager that it was a surprise to see him emerge for the second half.

Just look at the smiles on their faces.

Not everyone was smiling, though. Ronaldo left the dugout before the full-time whistle blew, something that all of social media was quick to notice.

Cristiano Ronaldo went down the tunnel at Old Trafford before the final whistle. pic.twitter.com/bnuFytZkxQ

After the match: What the managers, players said

Ten Hag on Ronaldo: “I will deal with that tomorrow, not today.”

Conte: “First of all, we have to be honest and say that United deserved to win and take the three points. They started the game much better than us, and it’s not the first time.

“It means we need to continue to work in every aspect, on the pitch, out of the pitch. At the same time, in this type of game, everyone needs to be prepared for the sporting war, I think we can improve in this aspect.”

– Manchester United’s 19 shots in the first 45 minutes was the most they’ve ever had in the first half of a Premier League game without scoring a goal.

– Manchester United have won six, drawn one and lost one across all competitions in games in which both Varane and Martinez start.

Manchester United: The Red Devils will be back in action in less than three days, Ten Hag & Co. having to manage a brief rest period before traveling to west London for a Premier League showdown with Chelsea at Stamford Bridge on Saturday.

Tottenham: Spurs return to the English capital and will have an extra day’s rest compared to Wednesday’s opponents, as they host Newcastle United at Tottenham Hotspur Stadium on Sunday in the Premier League.