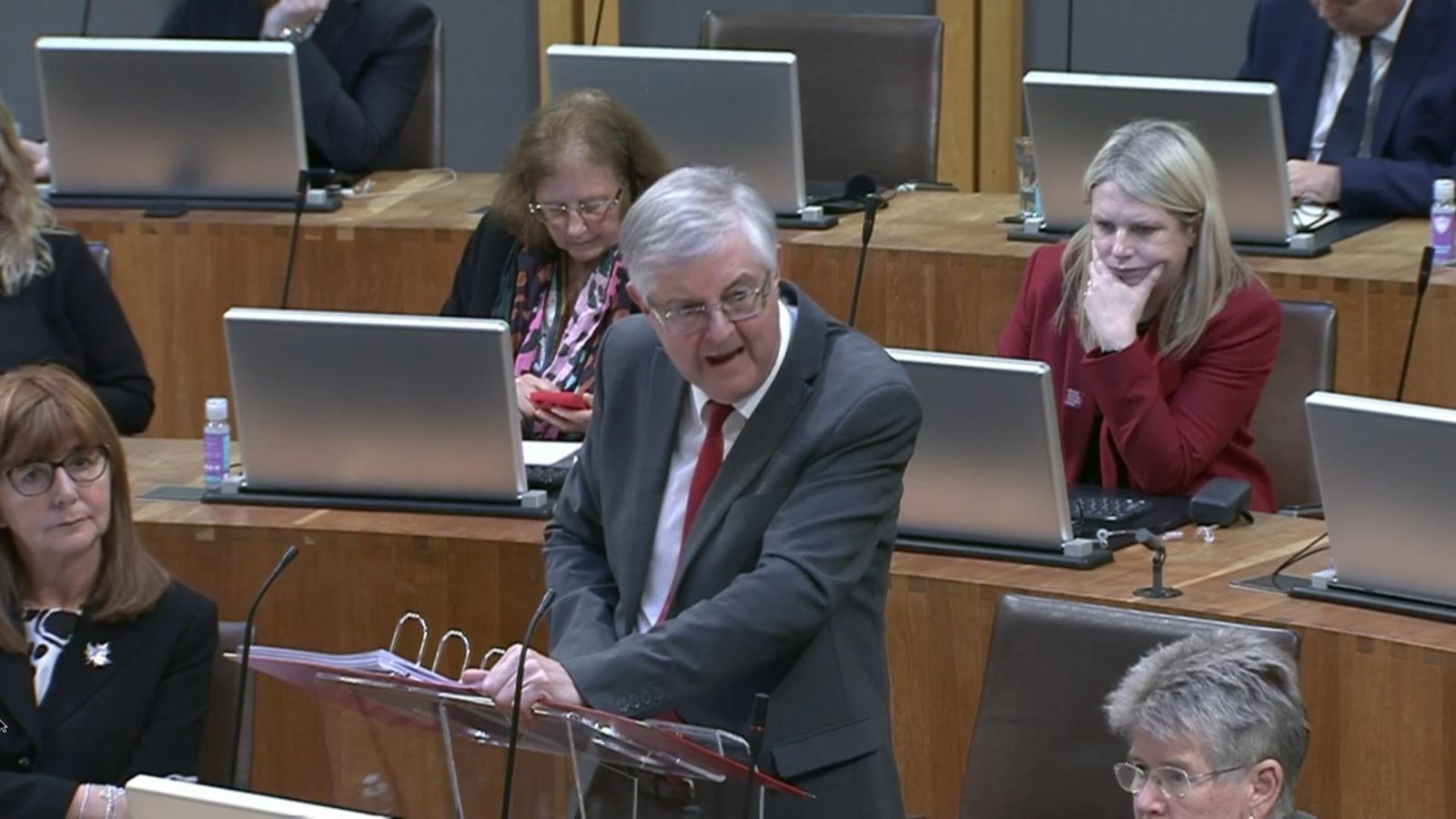 Wales’ First Minister Mark Drakeford erupted in anger in the Senedd this afternoon as he accused the Conservatives of making a mess of the UK’s budget and reputation.

Mr Drakeford raised his voice and pointed his finger in response to questions from leader of the Welsh Conservatives, Andrew RT Davies, about poor ambulance response times.

Addressing Mr Davies, Mr Drakeford said: “It is shocking, it is absolutely shocking to me that you think that you can turn up here this afternoon, with the mess that your party has made to the budgets of this country, to the reputation of this country around the world…and claim some sort of moral high ground?”

Politics live updates: No 10 hints triple lock could be abandoned

Angrily flipping his binding notes, he added: “What sort of world do you belong in?”

“I understand that the arguments and the feelings run high on these issues from a variety of perspectives,” she said.

“I understand some of the shouting taking place but I won’t have people pointing in anger and gesticulating in anger at other people. Can we just take a moment just to calm down.”

Both men had raised their voices during the heated exchange.

In his questions, Mr Davies raised examples of long waits for ambulances, including a pensioner who was stuck on a floor for 15 hours.

He said Aneurin Bevan, the Labour minister who oversaw the creation of the NHS, would be turning in his grave over the state it is currently in.

Mr Drakeford responded to say the Welsh government wanted to invest more in ambulance services and have more staff.

But he also attacked the UK government for more deep-seated problems, saying that NHS staff “face cuts to their pay because of the policy of your government”.

Mr Davies has accused Mr Drakeford of showing a “shameful lack of remorse” over his response.

“Rather than take responsibility for Labour’s poor running of the NHS, Mark Drakeford looked to pass the blame on to the UK government, despite the fact that health in Wales has been under Labour control for 25 years,” he said.

A spokesperson said: “We are deeply concerned about the position the UK government has put us in and the eye-watering scale of cuts facing public services in Wales.

“The first minister was reflecting the anger of people in Wales who are now having to pay for the mistakes made by the UK government.”

Nicola Sturgeon, first minister of Scotland, also voiced support for her Welsh counterpart, tweeting: “I’m 1000% with @MarkDrakeford in his anger and frustration at Tories who take a sledgehammer to the economy and public services, and then try to pretend that the consequences have nothing to do with them. They do just the same in (Scotland).”