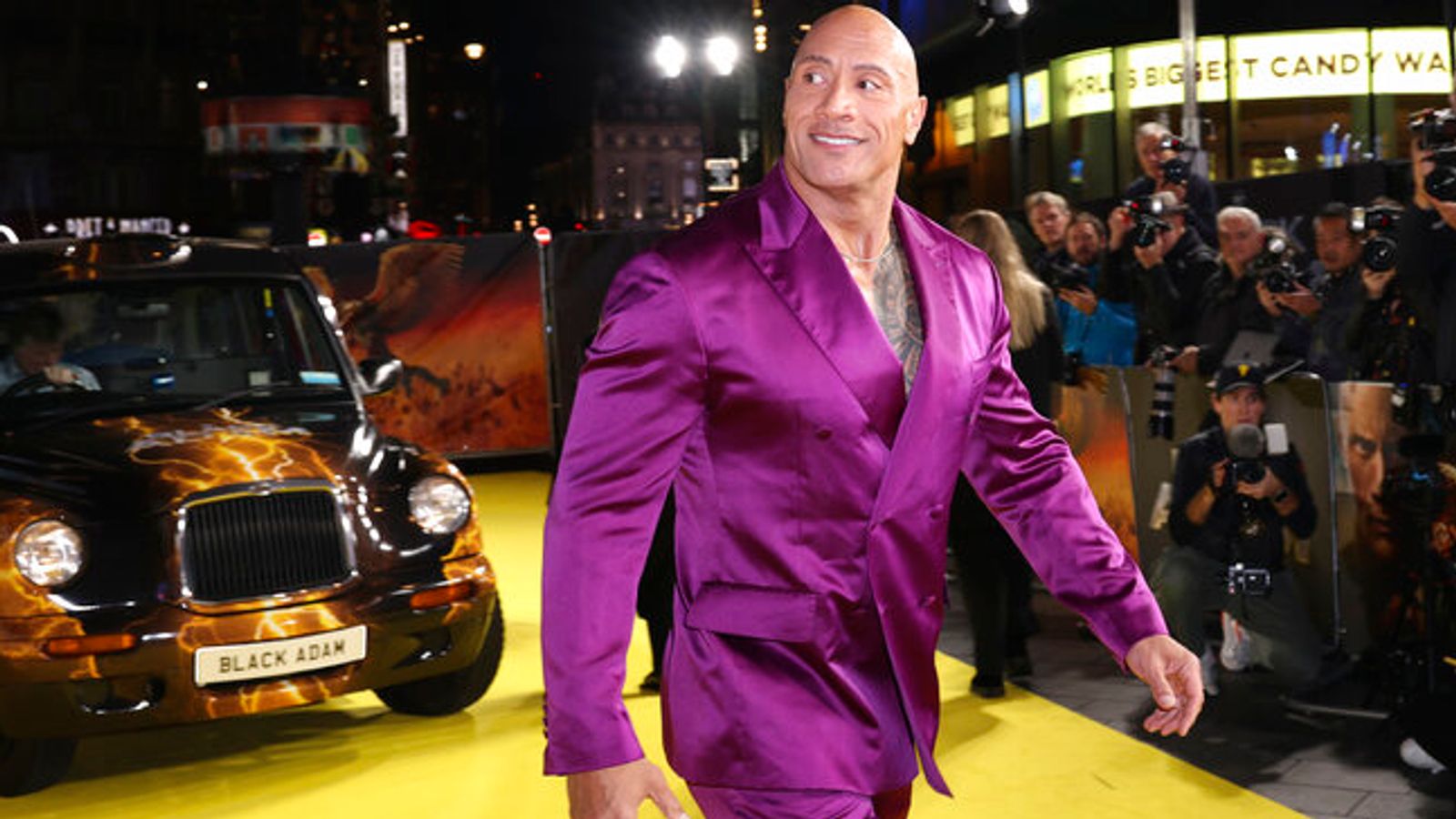 Among the highest paid actors in the world and widely considered as one of Hollywood’s nice guys, Dwayne Johnson is often asked whether he would think about running for president.

But when he is visiting the UK – and with the country in just a spot of political turmoil at the moment, it’s fair to say – how about a move into Number 10 to try to sort things out?

Speaking to Sky News at the premiere of his new “anti-hero” superhero film Black Adam, Johnson mentioned his political namesake as he asked if the UK would be prepared for him.

Johnson, also known by his nickname The Rock from his days as a professional wrestler, does not give much away.

The star’s comments came as a YouGov poll of Tory members found that more than half (55%) think Liz Truss should resign now – and almost a third (32%) believe her predecessor Boris Johnson would be the best person to replace her as prime minister.

Johnson (The Rock, not the former PM) has addressed calls in the US for him to make a White House bid several times, saying in a recent interview with CNN: “I have seriously considered it. You have to. When you start looking at some of these polls, and these numbers creep up into the 46%, 50% of the country would vote for me should I run, and I have been – I’ve been really moved by that.”

In September 2020, Johnson endorsed Joe Biden with a video interview in which he described the then upcoming election as “arguably the most critical” in decades.

The star said at the time that he was a “political independent and centrist” who had voted for both the Democrats and the Republicans in the past.

‘The most important role of my life’

At the moment though, with his career on screen showing no signs of slowing down, politics is on the backburner.

Johnson has played numerous action men and tough guys in the past, but Black Adam is his first foray into the superhero world.

Fifteen years in the making, he describes the film – based on the DC Comics character of the same name – as a “passion project” that he fought to turn into a reality when some studio executives weren’t sure it would sell.

Teth Adam is an anti-hero slave, blessed with the powers of Superman, who rises once again some 5,000 years after being imprisoned for using his powers for vengeance. In modern times, as he wields his dark sense of justice, he is challenged by a group of heroes known as the Justice Society.

Once a professional wrestler, and with a physique that lends itself to playing a superhero, Johnson has said this role was the only one he wanted to take on, writing on Instagram before the premiere: “When I was a little boy the one thing that drew me to Teth Adam when I saw my first Black Adam comic…

“He was a hero of color.

“That mattered to me then.

“As it matters to me now. Kids of ALL colors around the world will now be able to see themselves in Black Adam.”

Speaking to Sky News, Johnson said Black Adam was the “most important movie of my entire career”.

He continued: “I think it’s the most important role of my life. And what I mean by that, context for people, is I feel like everything that I have done has led to Black Adam.

“I also feel like Black Adam represents a commitment and a tenacity to keep pushing, when… there were a lot of people throughout the course of the past 15 years who felt like, well, is there real value in introducing Black Adam to the world? Will people like him?

“And I truly in my heart, I felt, yeah, if we make the movie right, we can create a character that people can see themselves in.”

Lifting of lockdowns in major Chinese cities signals shift in COVID stance
Universal credit: Families falling into crisis
‘May the Force be with you’: PM ‘sad’ as Javid to step down at next general election
Elon Musk’s firm accused of welfare violations after killing 1,500 animals in four years – report
Amber Heard files appeal against Johnny Depp libel trial verdict