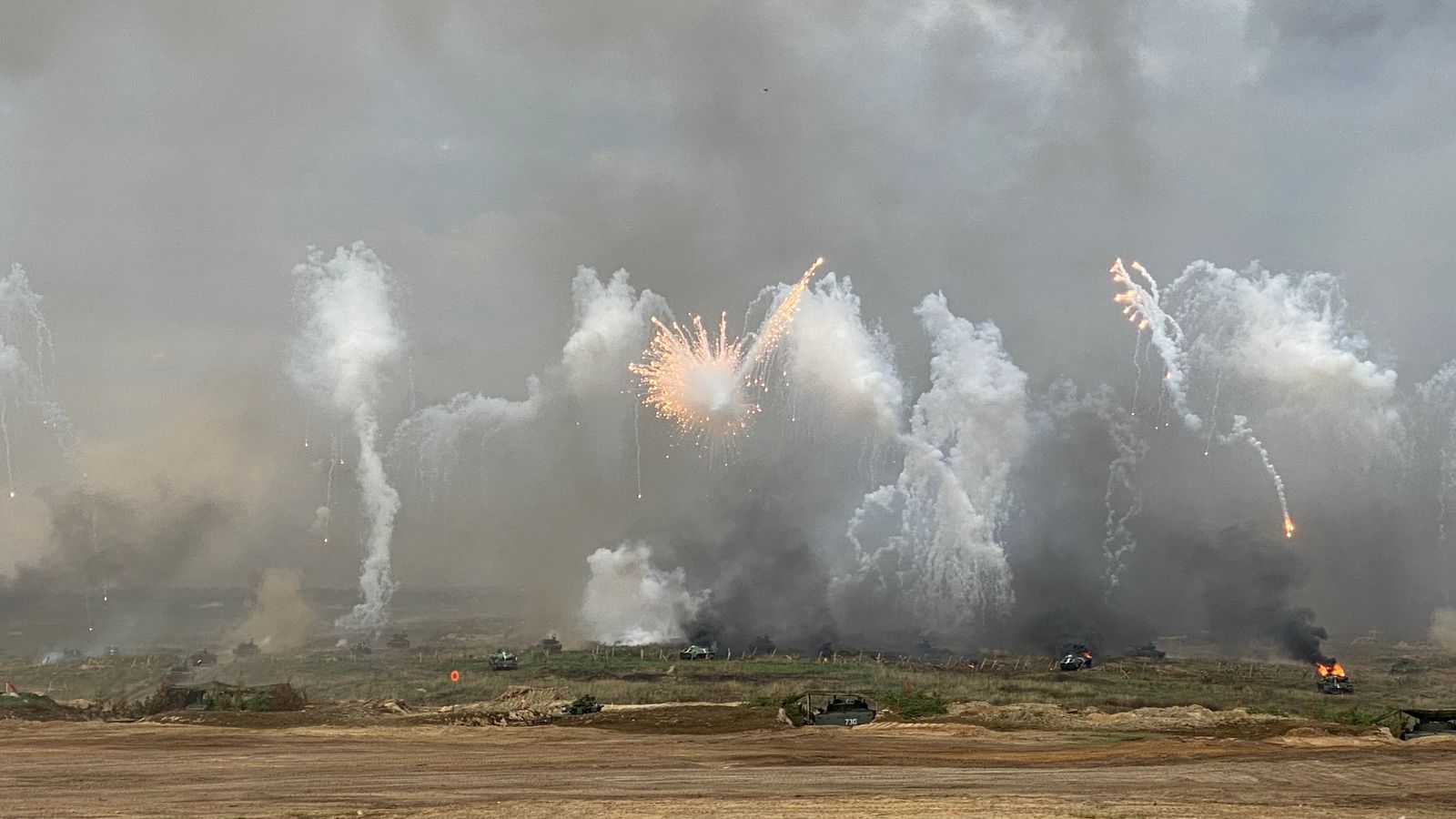 Behold the war games spectacular, a dazzling 45 minute piece of theatre for the commander-in-chief to ogle through his binoculars and for the Russian public back home to marvel at their country’s military might. Just in case they were wondering where all the money went.

And of course to impress upon the West quite what Russia is capable of.

This showpiece 45 minutes is part of possibly the largest military exercises up on NATO’s eastern flank since the end of the Cold War. Russia says 200,000 troops are taking part in Zapad 2021 which sees its most strategically important western military district carry out joint military drills for six days – at least in the active phase – with the Belarusian armed forces.

Those numbers may well be an exaggeration. Russia tends to inflate the numbers to impress the viewer back home and to scare the West. But they are large exercises whatever the exact numbers and have involved preparations and longer term troop movements for a couple of months already.

Zapad happens every four years and always rehearses the same scenario. A supposedly imaginary western coalition (aka NATO) is working with ‘terrorist’ elements to unseat the power in Belarus and take over parts of the country. The joint forces of the Union State, Russia and Belarus, must repel the invasion, defeat the enemy head-on and sustain a possibly longer term regional war with a nuclear component towards the end.

The game-changer this year is the role of Belarus. Alexander Lukashenko weathered last year’s street protests calling for his removal but he seems to have convinced himself as a result that the West means to carry out just the kind of colour revolution these exercises seek to defend against.

That means that his relationship with President Putin is going in one direction – towards ever closer integration, militarily too. Russia has now established a fairly constant military presence in Belarus including a joint Air Force training centre in Grodno, right up against the Belarusian border with both Poland and Lithuania.

President Lukashenko has also promised that he’ll buy $1bn worth of military kit from Russia, possibly including the S-400 anti-aircraft missile defence system.

“Of course, they’re buying them financed by Russian money, they can’t afford the stuff. And for Russia, this is all more leverage, because this is just another way they’re going to have Lukashenko over a barrel,” says Michael Kofman of the Kennan Institute in Washington who specialises in the Russian armed forces.

Poland, Latvia and Lithuania have all declared a state of emergency along their borders with Belarus because of the stream of migrants making their way over – most of them from Iraq but supplied with Belarusian tourist visas. The EU has condemned Lukashenko for instrumentalising migrants in what they call his hybrid war against the west. It is another reason his neighbours are concerned with these huge drills taking place right up against their borders.

The value of Zapad for the head of Russia’s armed forces is more about the part we journalists – and Russia’s President – don’t see. Testing the army’s response to new and unconventional threats, stress-testing how to keep an army supplied beyond the initial counter-attack, supplies, support, logistics across vast terrain. It’s about making sure the Russian armed forces are prepared for whatever comes their way – threats as well as opportunities.

Their commander-in-chief, Vladimir Putin, is ever the opportunist. Part of the messaging here for the West is that his military is ready to deploy guns blazing should he feel the need. NATO’s secretary-General Jens Stoltenberg has said he does not sense an imminent threat but that a more assertive Russia is a reality NATO must reckon with. “So we will continue to be vigilant, during Zapad and at all times,” Stoltenberg said.

MP planning to bring forward legislation that could see Harry and Meghan stripped of royal titles
Number of landlords selling up rises by nearly 13% in four months
Parking lots are becoming as important as cars in climate change efforts
Ukraine War: What impact will wet wintery weather have on war?
Tim Cook says Apple will use chips built in the U.S. at Arizona factory