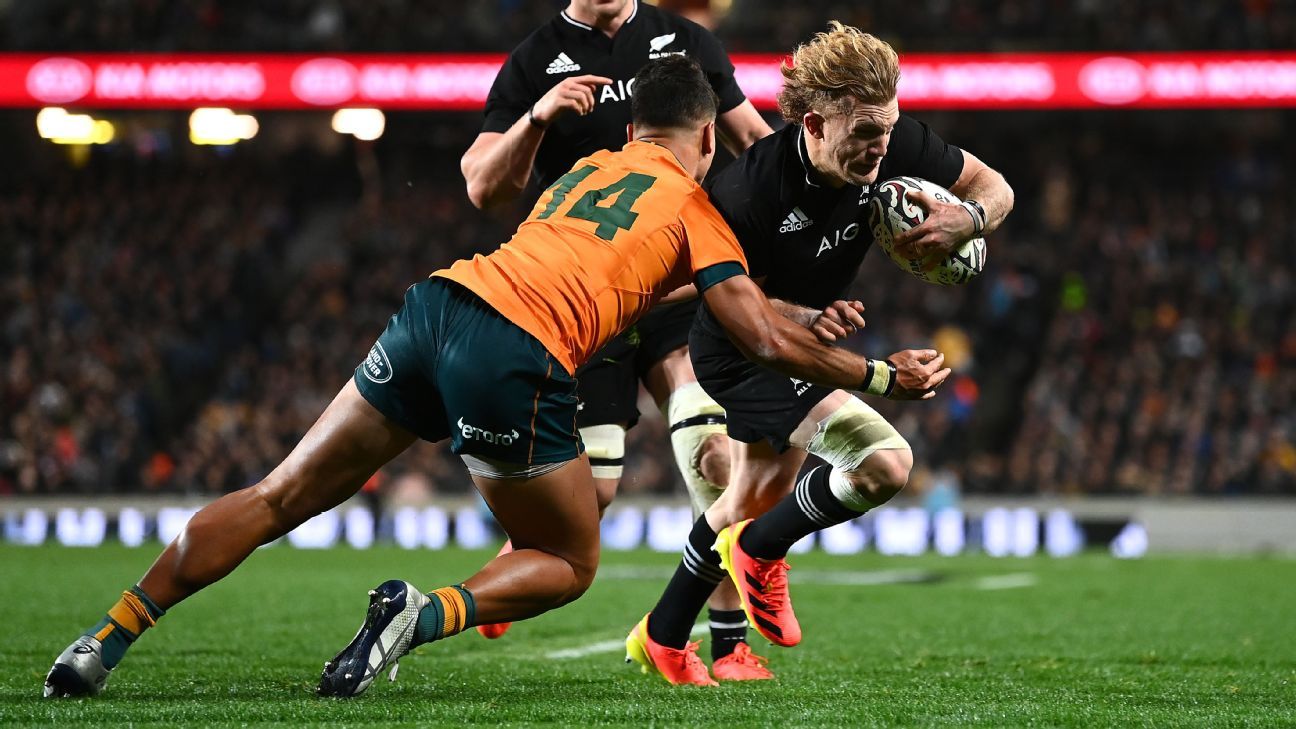 Strength in depth is a pillar that underpins the All Blacks, one set to be severely examined as they confront 12 Tests in the next 10 weeks.

Traditionally if the All Blacks don’t hurt opposition with their starting team they have an equally dynamic threat waiting on the bench.

Lose one front-line player to injury or other circumstance, and a seamless transition to the next cab off the rank is often achieved.

Much has changed in the six years since that global triumph yet this Test season Barrett, on return from his Japanese sabbatical, again found himself in that bench role alongside brothers Scott and Jordie.

With the All Blacks moving offshore for the remainder of the year, however, the global pandemic has complicated their stacked depth chart.

For the next three Tests – Sunday’s third Bledisloe Cup match in Perth and two Rugby Championship outings against the Pumas – the All Blacks are expected to be without three leading figures this season. And in many ways, that’s merely scratching the surface of the challenges Ian Foster will face in managing his squad for the rest of the year.

Stand-in captain Sam Whitelock, Richie Mo’unga and Aaron Smith, arguably the world’s best halfback, have been hugely influential for the All Blacks; a major reason why they remain unbeaten through five Tests in 2021 and, to this point at least, a vastly improved version of the team that stuttered to a 50% win record last year.

Unless Queensland changes its hard quarantine stipulations for New Zealand arrivals Whitelock, Mo’unga and Smith will be forced to spend two weeks in hotel quarantine – and at least another week rebuilding their frames – before returning to the Test arena. Injured All Blacks hooker Dane Coles and Cane – the skipper is not due to return until the end of year tour – are in the same situation.

In a non-pandemic consumed world Whitelock, Smith and Mo’unga would miss one Test to be present for the birth of their children, but New Zealand’s closed border status and quarantine complications significantly elongate their respective absences.

When inevitable injuries strike his initial 35-man squad in the coming weeks Foster faces something of a Rubik’s Cube scenario about whether to call up replacements. New Zealand’s national domestic competition has been halted for the past two weeks due to the nation-wide lockdown, leaving potential replacements in limbo.

Foster had hoped to ease senior props Joe Moody and Ofa Tuungafasi back through this avenue but when the latest COVID-19 outbreak hit, they were instead included in the squad and will return from injury – probably against the Pumas – on no recent game time.

Any replacement players called up will remain with the All Blacks for the rest of the season even if largely unused – and injured players are unlikely to return home, either – due to the lack of managed isolation facility availability in New Zealand.

As it stands, the All Blacks have a set number of spots booked from November 23 and no ability to send anyone back early. Scott Barrett, for example, is expecting his first child before then but there are no guarantees he will be able to return for the birth.

The upshot for Foster is the luxury of boasting three, in some cases four, contenders in each position could be fast eroded.

Mo’unga absence already shines a light on significantly declining depth with the All Blacks carrying only two first-fives in Beauden Barrett and Damian McKenzie, the latter option predominately a fullback and unproven as a Test No. 10.

To ensure all bases are covered flexibility and versatility will be vital within the All Blacks squad. In this regard, it would not surprise to see loose forwards covering lock, halfbacks covering first-five and outside backs covering midfield in the coming weeks.

Five Tests in as many weeks – two of those in succession against the world champion Springboks – is a gruelling stretch akin to a World Cup. Casualties are certain during that period, which will further test depth. A two-week break at the conclusion of the Rugby Championship will be welcomed but with that followed by another five Tests in a row on the end of year tour, the All Blacks will be battered, and carrying a bloated squad, by the time they return home.

In attempting to strike the rotation balance between not disrupting cohesion by making too many changes each week and needing to manage fatigue, Foster has a tricky juggling act ahead.

Adding to the immediate challenge against the Wallabies is the anointing of first time All Blacks captain Ardie Savea. Codie Taylor and Anton Lienert-Brown have replaced Whitelock and Smith in the leadership group, with Beauden Barrett and Brodie Retallick named vice-captains.

For the All Blacks to succeed on this arduous, complex tour it’s imperative that new-look leadership guides the team to a prosperous start because complications are such that it promises to only get more difficult from here.

This article was originally published by Espn.co.uk. Read the original article here.